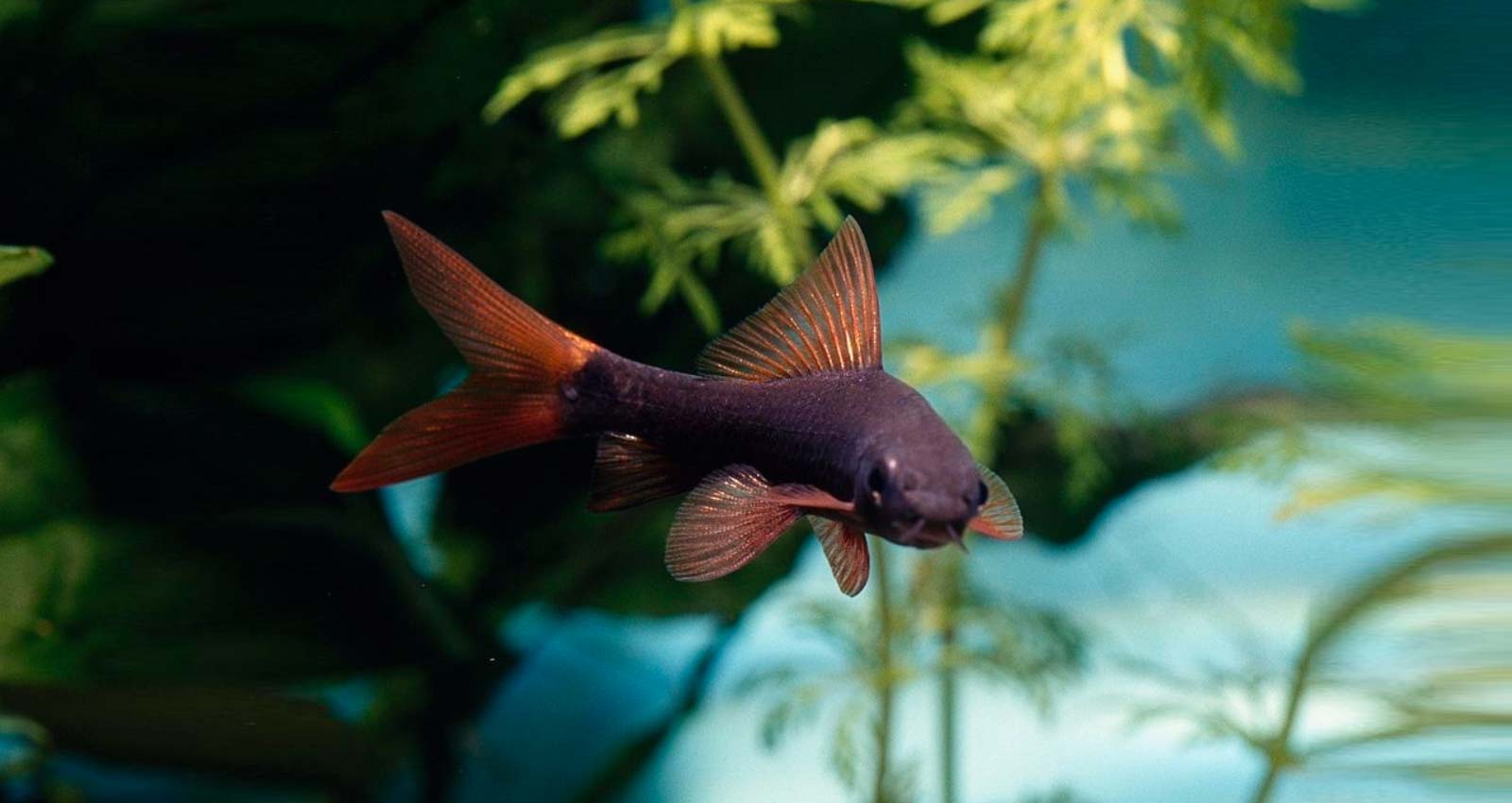 If you are looking for a freshwater fish that will add a beautiful pop of color to the lower level of your tank and help to keep it clean at the same time, then look no further.

The rainbow shark is a great fish to add to your underwater sanctuary.

To ensure that your Rainbow Shark is happy and healthy it is essential that you have the proper conditions for them to thrive and co-exist peacefully with their tank mates.

The following information will guide you on how to care for and safely introduce a Rainbow Shark to your aquarium.

The Rainbow Shark is a tropical freshwater fish. They are known for their shockingly red/orange fins and their territorial nature. The Rainbow Shark originated in the warm waters of Southeast Asia.

It is recommended that you have experience caring for fish before introducing a Rainbow Shark to your aquarium. They are not extremely difficult to care for; however, they do have certain requirements that should be met in order for them to have a healthy and stress-free life.

The Rainbow Shark is typically a shade of dark grey with brilliantly red/orange fins. They have a long flat stomach with a pointed snout. Their upright dorsal fin gives them the appearance of a shark; hence the name.

There is also an albino version of the Rainbow Shark. They require the same care and tank requirements. They have a shimmery silver/pink iridescent body with a more pastel shade of red/orange fins.

Rainbow sharks are omnivores so they eat meat and vegetables. To keep your Rainbow Shark healthy and vibrant it is essential to provide a diet with a variety of foods. It is recommended that you feed your Rainbow Shark three times a day.

When feeding your Rainbow Shark be sure that you don’t put out more food than they can eat within five minutes; if food is left after five minutes that means you are feeding them too much and the excess food will also cause issues in your nitrogen cycle.

It is important to be sure that the food makes it to the bottom of the tank as Rainbow Sharks do not like to come to the surface for their food. The more variety of foods that you offer, the more vibrant the Rainbow Shark’s colors will be.

Common meal options for feeding your rainbow sharks include but are not limited to:

Feeding juvenile Rainbow Sharks a well-balanced diet is essential to their development. If they do not receive adequate nutrition as juveniles their growth may be stunted as adults.

The Rainbow Shark is a territorial fish that can become aggressive and dominant when its environment is not ideal.

They tend to be more on the shy side and spend more time in hiding as juveniles; they become more aggressive as they mature sexually.

Rainbow Sharks are very active swimmers. Rainbow sharks are bottom feeders; they eat algae and food off the bottom of the aquarium floor.

They tend to be more peaceful with fish that live in the higher parts of the water because they do not encroach on their territory.

When the Rainbow Shark becomes aggressive their behavior consists of biting, head/tail butting, and chasing fish around the tank.

To reduce this behavior be sure that you have the proper fish to water ratio so that everyone has their own space and can get along more peacefully.

Rainbow Sharks can be a bit jumpy at times, especially when they are first put into the aquarium. For this reason, be sure that your tank has a secure top on it.

Expert Tip: Rainbow Sharks can be bullies at times. Try to keep tank mates that are the same size as the Rainbow shark or a little bit bigger to keep them from picking on the smaller fish.

When introducing a Rainbow Shark to a new aquarium it is imperative to remember that the longer the tank is the happier and healthier your fish will be. Rainbow Sharks like to swim very fast on a horizontal level.

If you plan on keeping multiple Rainbow Sharks in a tank be sure that it is at least six feet in length so they have ample space to comfortably swim around and live.

When choosing a substrate it is best to use sand or very fine aquarium gravel. Rainbow Sharks are bottom feeders and this is the type of substrate that they encounter in the waters of their natural environment.

If you use larger gravel it can be dangerous to the fish as they can ingest larger pieces and become choked and/or cut themselves on the sharp edges.

Rainbow Sharks should be kept in water temperatures between 71-81°F, the pH level should be kept at around 6.5-7.5 and the Alkalinity should be around 5-11. It is important to keep your pH balanced.

Always keep a water testing kit on hand so that you can be sure your tank is in tip-top shape for your aquatic critters. An increase in alkalinity can cause the rainbow shark to become more aggressive.

The lighting in the tank should be kept at a medium level. Since rainbow sharks like a moderate current sometimes it is necessary to add an air stone or wavemaker to your tank if the filter does not create enough movement.

When caring for multiple fish it is always a good idea to have a second tank set up in the event that you need to separate them due to illness or territorial behavior.

Another thing to keep in mind when planning your aquarium space is the location. You want to avoid putting your tank in a location that can be affected by other environmental factors.

Try to avoid putting your tank near any windows, electronics, or anything else that puts off extra light or heat. Another way to reduce temperature is aquarium chiller.

These extra factors can throw off the balance in your tank and require you to have to monitor and maintain the habitat more frequently.

Expert Tip: When adding Rainbow Sharks to your aquarium add them last. If you add them first they may try to claim the entire aquarium as their own.

Common diseases that freshwater fish can encounter are as follows:

Rainbow Sharks are fairly robust fish; however, they are not totally immune to contracting a disease. The main reason that a Rainbow Shark will contract a disease is if the water conditions are not ideal.

While the Rainbow Shark is a bottom feeder it still requires freshwater that is kept within the proper parameters.

To prevent your fish from contracting a disease keep a regular maintenance schedule for your tank cleaning and water changing.

In the event that Rainbow Shark does become ill, it is best to remove them from the community tank; they can become more aggressive when they are sick and it also reduces the risk of getting the other fish sick.

When your Rainbow Shark is sick it is important to keep a well-balanced diet high in protein and fresh vegetables.

When using antibiotics the best combination to look for is oxybispropanol and praziquantel. Avoid treatments that contain copper, salt, and dyes such as malachite green.

It is important to plan accordingly when choosing tank mates for your Rainbow Shark. Choose fish that will not encroach on each other’s territories and be sure to have plenty of space for each fish to have its own spot.

When a fish has its own space it feels safer and will be happier, healthier, and get along with others better.

We recommend that you avoid other bottom feeders and tank mates that have a similar appearance to the rainbow shark as that can cause them to become more territorial and aggressive.

It is not recommended that you keep more than one rainbow shark in a tank because of its territorial/aggressive nature.

The following are all compatible tank mates for the Rainbow Shark:

Rainbow sharks are rarely bred in captivity due to their territorial nature and the fact that they are typically not housed with other rainbow sharks. In the wild, a female Rainbow Shark will lay her eggs in a private place and the males will spray them.

Once the males have sprayed the eggs they will hatch within 5-7 days. Within 2-3 weeks, the fry will have grown to be around a half of an inch long.

Rainbow Sharks typically reach their full size within 3-6 months. Typically Rainbow Sharks breed during the colder months, but that is not set in stone as they have been known to breed when it is warmer in some situations.

If you do want to take a stab at breeding these finicky fish, be sure to have the proper housing and supplies before you take on this task.

To breed Rainbow Sharks, you will need to have two aquariums. It is recommended that you reserve one tank for breeding purposes and the second tank for isolation reasons.

The breeding tank should be a minimum of 80 gallons to allow the fish adequate hiding space and room to swim. It is especially important to have plenty of plants, caves, and other hiding places for your fish to feel comfortable laying her eggs in.

For breeding tank a good plant is Water Sprite. It is an easy-growing plant that will provide many hiding places.

There is not a lot of information available on breeding Rainbow Sharks in captivity, so it is imperative that you monitor your fish closely in the unlikely event that you are successful in breeding your Rainbow Sharks. Many fish breeds will eat their young.

If you feel that your Rainbow Sharks are displaying this behavior remove them from the tank. Once the fry hatch, they will feed off of their yolk sacs.

Once the yolk sacs are gone you will need to feed them algae and baby brine shrimp to keep them healthy.

A fully matured female will have a thicker body and fully matured males will develop black lines on their tail fin. Mature males tend to be more vibrant in color as well.

When introducing a Rainbow Shark into your aquarium, be sure that you have plenty of horizontal space for them to swim and ample room for them to claim as their territory to ensure peaceful cohabitation between your fish.

The vibrant color of the Rainbow Shark’s fins is sure to add the pop of color to the bottom level of your tank that you have been looking for.

We are a participant in the Amazon Services LLC Associates Program, an affiliate advertising program designed to provide a means for sites to earn advertising fees by advertising and linking to Amazon.com, Amazon.co.uk, Amazon.de